ANDRITZ Smelt Spout Cleaning Systems are proving to be something of a hit with recovery boiler operators world-wide, with several successful installations and more than 20 new systems on order.

Nevertheless, the work never stops in developing the robotic systems further; ANDRITZ experts have devised a number of new features that help to provide an even safer working environment, as well as new intelligent tools for managing efficiency in a recovery boiler.

The spout deck in a recovery boiler is possibly one of the most dangerous places in a pulp mill. This is also an extremely dynamic area of the mill, needing constant management and maintenance to ensure continuous and reliable operation of the boiler. In 2019, ANDRITZ launched its first Smelt Spout Cleaning System to address safety issues and to improve overall runnability and efficiency of the recovery boiler operation. So far, the cleaning systems have been extremely well received by pulp producing customers and now ANDRITZ has a full order book.

Jarkko Brunou, Product Manager, ANDRITZ Oy says, “We have had an excellent response to our first Smelt Spout Cleaning Systems which basically use robots to monitor and clear the smelt spouts in the recovery boiler. This is a very hot and potentially dangerous area and using the robotic cleaning systems means that much less man hours need to be spent working on the spout deck.

“Although our first installations were well received and have been operating successfully, we at ANDRITZ have also learned a lot of operating the robots in such a harsh environment and because of this we have added a number of new and extra features to our systems.”

NEW FEATURES ACROSS THE BOARD

New features that are now available with the Smelt Spout Cleaning System include a more powerful robot with stronger cleaning power, smelt reduction measurement, a collision-free robotic operation, a new suit, specially designed and built-in cameras, a smart cleaning function and tool cleaning station. ANDRITZ has also made installation of the system a lot easier and safer by designing a new robot frame which further increases safety and greatly reduces erection and installation time.

“One of the main advances we have made is to make the robot even more powerful than the previous ones,” says Brunou. “They now have a payload of 250 kgs as opposed to 150 kgs. Added to this we have updated the tool which makes it more durable and stable, giving more consistency during spout cleaning.”

“We have also introduced a feature on the tool to carry out automatic smelt reduction measuring.”

The new smelt reduction measuring feature is very important, stresses Brunou. “This is a world first; we can now automatically measure smelt reductions by taking samples from each spout and measuring them separately. This is a major advancement as the results from the samples are instant. In normal operations you would have to wait several hours for feedback.”

Brunou continues, “This brings major benefits when it comes to customer value; as well as the safety aspects of the cleaning system, an operator can also keep a constant eye on what is happening in the boiler in real time.”

Another major new introduction is spout location tracking utilizing laser sensors which that the operation of the robots is completely collision free. “The robot goes forward exactly the same route as it comes backwards,” explains Brunou. “This is really important when operating in a tight space as the robot needs to reach many different places. There have been no reports of collisions so far on any of the systems we have delivered.”

ANDRITZ’s experts have also redesigned the suit that goes over the robots to protect the moving parts from the harsh environment while operating in the spout area. Brunou explains, “We have redesigned the suit and utilized a different material due to the persistent hot particles encountered on the spout deck. The new material and design mean that the suit will have a longer life-time than the previous version.”

Also added to the latest systems, ANDRITZ has implemented special 3D printed metallic cases to hold cameras for filming inside the furnace of the boiler for improved monitoring.  The cameras, which can operate in temperatures of up to 300oC, have been installed on the robot arm for added monitoring of the recovery boiler.

A smart cleaning station has now been introduced to the system which allows autonomous, intelligent cleaning of the spout. Brunou explains, “Using Metris AVA via the cameras, the robot takes care of the cleaning when it “sees” that the spout is dirty and cleans it automatically. In a normal situation the robot would clean spouts at regular intervals utilizing a timer. Smart cleaning ensures that the spouts are cleaned right at the time they are getting fouled.”

ANDRITZ has also designed a new robot frame to make installation of the system much safer, easier and ultimately less time consuming. The current version of the robot is installed in  just one day.

“All these new additions and adaptations have further increased safety on the recovery smelt spout deck, as well as increased stability, availability and ultimately improved the operation of the recovery boiler,” concludes Brunou. 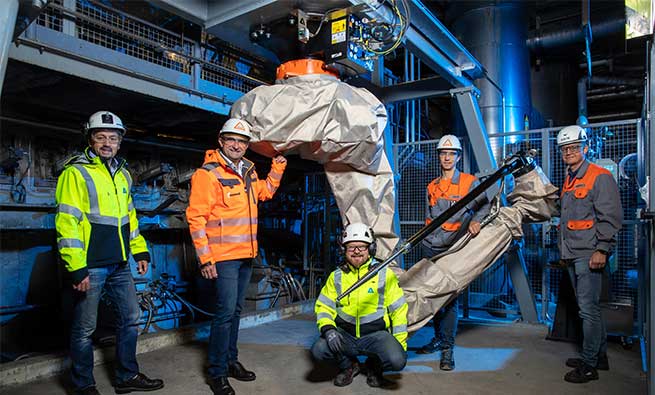 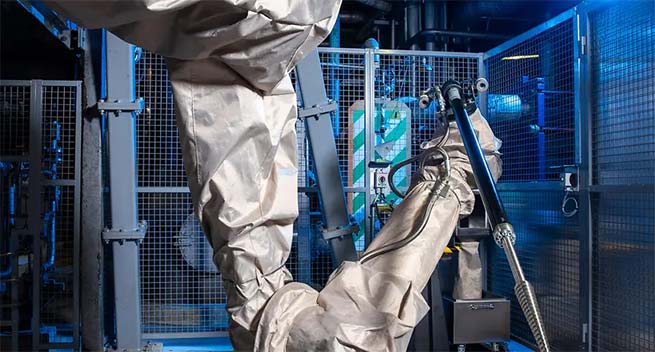 One of the latest installations of the Smelt Spout Cleaning System took place at the Mondi Frantschach mill in Carinthia Province, Austria last year. The management at the mill was impressed first and foremost with the safety aspects of the system, and contracts were signed for a new installation which took place in September 2021.

Michael Gruber, Project Manager at the Frantschach mill says, “At Mondi we are always looking for ways to reduce risks to our employees, and here our focus was the smelt spout area. After looking at various options on the market we decided upon the ANDRITZ system as it fitted well into the tight area in front of the smelt spouts in our recovery boiler.”

“Another advantage was that our recovery boiler was delivered and installed by ANDRITZ, which meant there was already a lot of knowledge of the equipment and processes. It also meant that the whole package could be installed with the minimum of fuss as the interfaces were the same. In fact, it was virtually a “plug and play” when it came to installation. Added to this, we knew ANDRITZ already has a lot of knowledge and experience following successful installations of the spout cleaning system on other recovery boilers.”

After some consultation, the contract for a Smelt Spout Cleaning System was signed in January 2021. ANDRITZ supplied a complete system to the mill, including a smelt spout robot with a payload of 210 kgs and a working radius of R3100. It also supplied a cleaning station, DCS control and on arm cameras. The system was installed and started up in September 2021.

“We were really pleased at how the installation of the cleaning system went,” says Gruber. “Despite a tight space in the smelt spot area and the movement of heavy equipment, ANDRITZ had planned the operation perfectly, with all engineers automatically knowing what they had to do next to ensure a smooth installation.”

CLEANING SPOUTS IN THE FIRST MINUTE

Another challenge was that there was a small window of shut down time for the installation to take place, Gruber says, “It was one of our worries that there might be delays in the installation which would increase shut down time, but no such delays occurred. In fact, the system started up on time and within the first minute the smelt spout robot was up and running and cleaning the spouts.”

So, what difference has the system made to operations at the mill? Says Gruber, “First of all we are very pleased with the safety aspect. This is an important result for us.”

“Secondly we have noticed a major benefit in efficiency; in the past the cleaning of the spouts took place periodically in a shift. Now we have continuous cleaning which has led to an improved flow of the smelt out of the recovery boiler.”

Walter Scholz-Sommerbauer, ANDRITZ Pulp and Paper Mill Service and Mondi Frantschach Key Account Manager, says, “It is very nice to hear that our robotic system is fully integrated into the daily business at the mill and that it will lead to improved safety for the customer. We are proud to be a partner with the Mondi Group with our new innovation, which adds to several other references that we already have in our regional market.

“There was a lot of intricate planning involved with this project as the system had to go into a very tight space. The new frame design helped greatly in the installation of the system, particularly from the aspect of moving and turning heavy parts.”

A MILESTONE IN GREATER WORK SAFETY

Gottfried Joham, Managing Director at Mondi Frantschach, sums up the importance of the new system at the mill, “Installation and operation of the new smelt spout robot at recovery boiler #4 has created a milestone in terms of greater work safety in this very challenging environment. The robot, which cleans the boiler’s smelt spouts continuously and reliably, ensures that there is a constant flow of smelt, guaranteeing regular boiler operations without our staff having to intervene manually.

By using a robot, we have substantially reduced the physical and also the mental strain in this exposed area. In close and very constructive collaboration with ANDRITZ, this project was completed successfully on time and within budget. We are grateful to all those who played a part in implementing this pioneering technology.”