Florian Schmidt at the Department of Applied Physics and Electronics at Umeå University, together with researchers at RISE Piteå, receives SEK 7.7 million from the Swedish Energy Agency to generate the necessary knowledge for implementation of oxyfuel combustion in existing biomass combustion plants.

The goal is to facilitate carbon capture and thereby contribute to decreased emissions.

In Sweden, combustion of solid biomass together with carbon capture and storage (BECCS) has the potential to generate> 10 million tons of negative carbon dioxide emissions per year until 2045.

A promising way to achieve BECCS is to implement oxy-fuel combustion of biomass in existing plants for heat and power production and waste incineration. The sustainability can be increased by using residual products from forestry, agriculture and industry.

In the oxy-fuel combustion process, pure oxygen is used instead of air in order to generate a high concentration of carbon dioxide in the flue gas, which facilitates subsequent capture and storage of carbon dioxide. The advantages of the technology also include high combustion efficiency, reduced flue gas volume, and reduced formation of nitrogen oxides and carbon monoxide.

In this four-year project, experiments will be carried out on a pilot-scale to investigate the fuel conversion in the carbon-rich atmosphere generated in the process. The focus is on investigating process stability and control, gas phase and ash chemistry, and carbon dioxide purity in the flue gas.

- We will use advanced diagnostic methods, ranging from in situ gas measurements with laser spectroscopy to solid phase analysis with scanning electron microscopy, to investigate the complex process, says main applicant Florian Schmidt, associate professor at the Department of Applied Physics and Electronics at Umeå University. Co-applicants are Dr. Alexey Sepman and Dr. Henrik Wiinikka, both at RISE in Piteå. 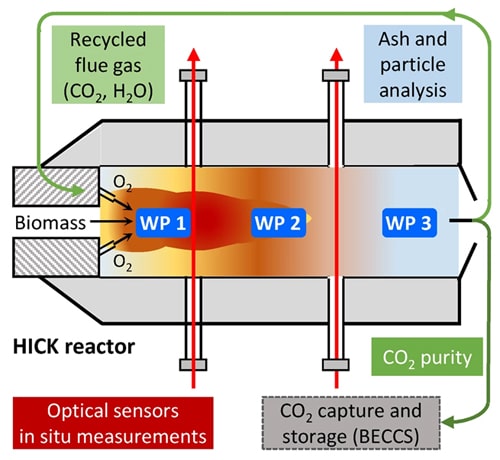 In oxy-fuel combustion, pure oxygen (mixed with a part of the carbon dioxide-rich flue gas) is used for thermochemical conversion of the fuel. The carbon dioxide in the flue gas can then be separated and stored. In the project, advanced diagnostics will be used to investigate process stability, gas phase and ash chemistry, and the chemical composition of the flue gas. ImageFlorian Schmidt

This project creates the conditions to facilitate the implementation of new industrial solutions, which in the long term can lead to significant technological leaps towards sharply reduced Swedish greenhouse gas emissions in a sustainable energy system.