Using the pilot machine in Apprieu, the researchers succeeded in producing electrode paper in a continuous process. Photo: Ahlstrom-Munksjö.

A long-standing collaboration between KTH Royal Institute of Technology, Linköping University and RISE in Sweden has resulted in an electrode paper that could be used for energy storage in batteries or supercapacitors. An important development step was the recent pilot runs to produce enough electrode paper for a continued application development.

The electrode paper project is run within the Digital Cellulose Centre, DCC, which also includes paper industry companies, label manufacturers, material manufacturers as well as recycling actors. As the name suggests, the business is a combination of digitalisation and a quest for bio-based economics and the interplay between them. The project partners are investigating new materials, material combinations and components, but also at recycling to facilitate circularity already in the design phase.

Karl Håkansson, researcher at RISE, and Lars Wågberg, professor of Fibre Technology at the Department of Fibre and Polymer Technology at KTH, talk about how far they have come on the path to a completely new paper application.

“The origins of the electrode paper project go back twenty years in time when research was aimed at developing a technology for printing electronics on paper,” says Karl Håkansson. “Unlike plastic, a paper surface is not smooth, which made printing conductive tracks difficult, and therefore, the Power Paper project started ten years ago with a different aim. Instead of printing on the paper, the paper is filled with components for conducting electricity and storing energy. In this case, no thin layers are needed as the paper is filled to store as much energy as possible. In Power Paper, it was also discovered that the use of cellulose nanofibrils, CNF, in various energy storage components opened completely new possibilities.” 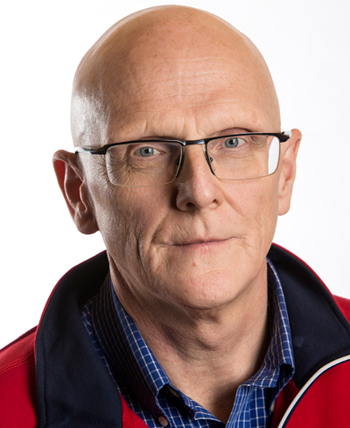 “We work on several different tracks, for example the development of simpler batteries on packaging for operation of sensors and for extremely large-scale energy storage,” says Lars Wågberg. Photo: WWSC.

The next step was the Production of Power Papers project where research was done for five years to refine the mix of components to enable production on a slightly larger scale. The focus of this project has been on basic understanding although one part of the budget is reserved for the utilization of results. It was therefore decided that a pilot trial would be carried out based on some of the results obtained and in addition to KTH, LiU and RISE, the companies Ahlstrom-Munksjö and Agfa participated in this project. Agfa is a manufacturer of the conducting polymer that is part of the product concept and Ahlstrom-Munksjö has specialty paper machines both in full scale and on a pilot scale.

“We started by looking at different material mixtures to understand the function of the constituent components,” Karl Håkansson continues. “The next step was to design the material to be able to be produced in a pilot scale paper machine. Retention is of course important so that the components do not just pass straight through the wire.” 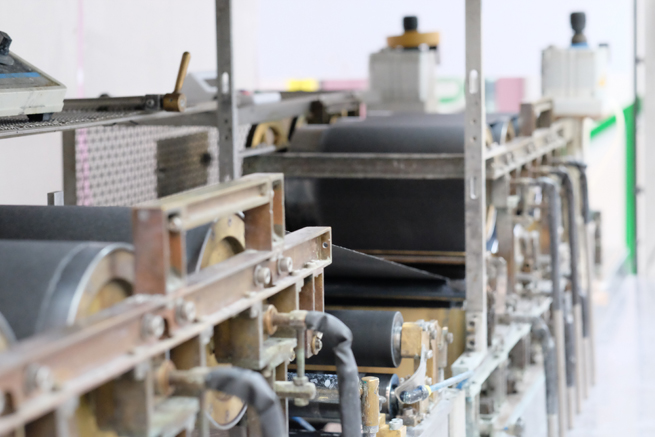 ”The aim is to fill the paper with quite a lot of conductive material and bio-based activated carbon. We tested both regular pulps and special pulps in lab scale as well as in pilot scale. The cellulose fibres are acting both as a carrier and as a binder and are important in making the paper processable. Our results also show that there is a beneficial interaction between cellulose and the other materials. Carbon and cellulose have a suitable interaction for both retention and that everything settles in the right place in the final material. In one of the experiments, cationized fibres were used to bind the conductive polymer to the fibres before the other components were mixed in.”

The function of carbon is to store energy and in addition a component is needed that conducts electricity. The result is a homogeneous electrode paper that becomes one component in either a battery cell or a kind of supercapacitor. To get a working component, one must have two papers, an insulating layer and an electrolyte and everything must then be packed in a protective layer. A battery can store a lot of energy, but takes a long time to discharge while a supercapacitor can store less energy but can be discharged very quickly. The component with electrode paper constitutes a mixture of both. The material combination chosen for the pilot experiments was based on the evaluations and optimizations carried out at RISE and the Laboratory for Organic Electronics (LOE) at Linköping University. 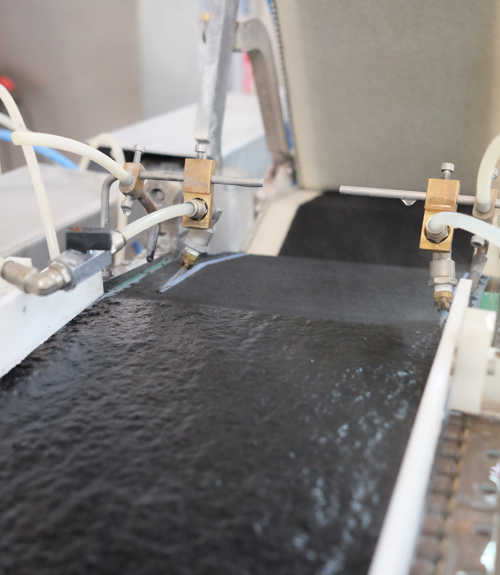 “The pilot trial was done with the help of Ahlstrom-Munksjö's pilot machine in their French research centre in Apprieu,” says Lars Wågberg. “Normally during a pilot run, the researchers are on site to see, document and collect samples and materials, but due to the pandemic, this was unfortunately impossible. Instead, we had frequent Teams meetings with the researchers in Apprieu. These meetings were coordinated by Ahlstrom-Munksjö's staff in Sweden and all showed a great commitment to the experiments, including via live video that showed how forming, pressing and drying developed under different process conditions. Everyone was very dedicated to carry out as thorough experiments as possible and the result was therefore really good. The result of the pilot run was several reels with ten meters of electrode paper in each.”

“We tried to "push" the machine as far as possible to see how much of the active components we could get into the paper. It was also important to get a good retention so that the components stay in the paper. We are now evaluating the electronic properties to be able to compare papers made with different recipes.”

“The mechanical properties, as well as the fibre network, of the paper are of course important so that the fibres in the electrode paper will join strongly together and that there will be good contact within the paper between the conducting components,” Karl Håkansson continues. “We are now optimizing the paper by examining the effect of, for example, pressing and heating of the manufactured product to clarify the effect of the fibre-fibre bonding. The paper strength, as such, is not the most important thing, but it is essential to get as much carbon and charge carrier as possible into the structure at an acceptable strength level of the paper.” 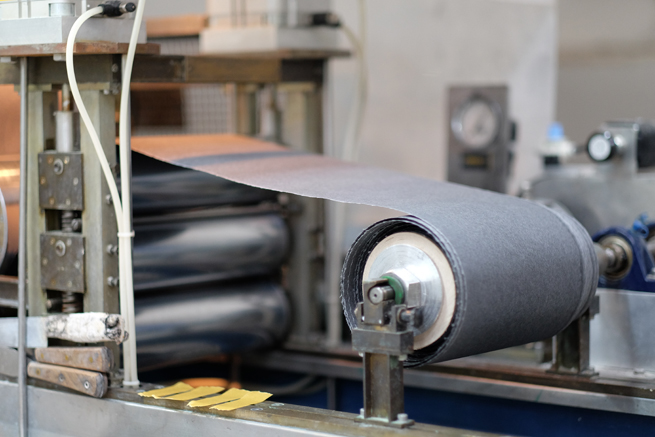 The finished electrode paper is rolled up for further evaluation and development. Photo: Ahlstrom-Munksjö.

“We are now making components such as supercapacitors and batteries and assembling them for testing of the electrical and energy storage properties. We are mainly evaluating flat geometries as well as different electrolytes. With a water-based electrolyte you cannot go up to the same high voltage as you are limited by "water splitting", but by using an ionic solvent as electrolyte you can go higher and hence get higher storage capacity.”

“We are evaluating different possibilities; among other things by developing simpler batteries on packaging materials for the operation of sensors and, for example, for extremely large-scale energy storage at wind power plants,” says Lars Wågberg. “Wind turbines, solar energy and offshore energy units are not producing energy all the time and an energy storage is therefore required to be of the best use. For this application, you can use more large-scale technology, which of course requires more space, but at a wind power plant, for example, it is ok if there are two shipping containers to store energy as space usually exists.”

“Of course, there are still many problems to solve, but our ambition with this pilot experiment has been to produce more material to share with a larger circle of stakeholders who can help us produce different demonstrators to raise interest among producers and users as well as at investors. In this way, it will also be possible to identify the different parties that could take this further, as well as to evaluate and optimize the technology economy for materials, raw materials and process. Fibre and carbon are cheap, but how much of the expensive components must be in the electrode paper? What will be the next upscaling step of both the production of the electrode paper and conversion to products / demonstrators? What types of companies will be in the value chain?”

When one calculates the volumes that will be needed for this type of electrode paper, at least in a start-up phase, one realizes that production will not take place using fast and wide paper machines but a completely new type of production equipment will be needed. This can of course be a problem, but it can also be seen as a great opportunity where larger pilot machines can be used for production to manufacture the materials needed. Both Karl Håkansson and Lars Wågberg consider this to be an excellent fit for the continuation of the work in DCC. 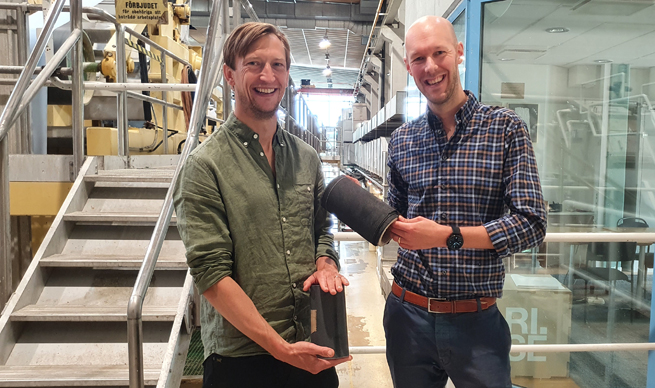 Researchers Andreas Fall and Karl Håkansson, RISE Bioeconomy and Health, look forward to "putting their teeth into" the electrode paper to evaluate its properties and potential. Photo: RISE.